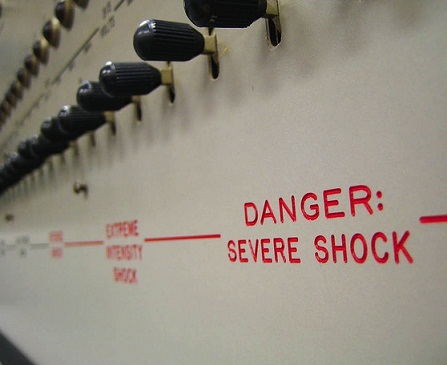 Obedience In The Modern Day

It’s one of the most discussed psychological experiments of all time and even now, almost 40 years later, it is still being replicated.  Milgram’s famous obedience research (1974) in which he tested the obedience of participants administering electric shocks to other people, has been replicated in France in the format of a TV game show.

It was a piece of research that was highly debated for its shocking ethical standards.  However, without such a departure from the world of ethics it would not have caused quite so much long term controversy, nor would it have provided us with such insights.

In the experiments that took place in a science laboratory at the prestigious Yale University, participants were told they were being assigned to either the role of ‘teacher’ or ‘learner’.  In actual fact the participants were all assigned to the role of teacher whilst hired actors played the role of learner.  The teachers were influenced by a ‘laboratory scientist’ in a white lab coat (also played by an actor) into administering electric shocks to the learners for questions answered incorrectly.  A large percentage of the participants in the numerous studies conducted by Milgram were found to obediently administer the shocks on the basis of the scientist’s orders, despite hearing screams from the learners.  The voltage the teachers were administering reached dangerous heights and yet despite being aware that the voltage was too dangerous for the human body, they continued on and on, obeying the lab scientist’s instructions to electrically shock the learners.

The research gave way to a number of analyses.  Several explanations could be used to understand why a person would obey someone into administering severe shocks to another human being in this type of environment.  What we learn from this research tells us a great deal about human behaviour.  Three such explanations are as follows:

1.  The shocks start off small and harmless.  The participants become accustomed to this pattern of behaviour and continue on (administering higher voltages) because it is easier to continue than change their mind.  This is similar to the Freedman and Fraser (1966) research into the foot-in-the-door persuasion technique.

Getting people to do something they have become accustomed to doing is easier than getting them to change their habit and start on a new course of action.  This also explains why people can become stuck in a rut in their relationships and will stay stuck and discontent because they find it easier than changing their behaviour to get out of the rut and become happy.  Understand that change can be difficult but if it means improved relationships, happiness, health and wealth, then changing habits is absolutely vital.

2. Milgram also found that the physical proximity between the participant and the learner affected the obedience level in the participant.  The participant would be more obedient and, therefore, administer highly dangerous shocks when the learners were unseen and unheard, save their pounding on the walls.  When the learner could be seen or, worse, was seen being pinned down by the lab scientist, the percentage of participants willing to electrically shock the learner was reduced.

It is easier for people to behave in a hurtful way when they cannot see its immediate effect.  People hurt themselves with their negative self-talk and hurt others with their negative comments and actions.  We must anticipate the immediate and long-term effects of our words and actions in order to establish whether we are proudly willing to continue down the current path.  Would you cheat on your partner if they could see you doing it?  Would you continuously say negative things to your child if you realised how much this would hinder their life?  Would you constantly berate your workforce if you realised the impact on your own profits?

We are who we associate with, partially through peer pressure to act in a way that the rest of the group expects.  Who do you associate with and what do they influence you into thinking, believing and doing and, most importantly, is it conducive to the relationships you have in your work life and personal life.

In my book Relationship Remedies, in Chapter 19 entitled ‘Don’t Get Washed Away’, I include the case study of someone who began to feel themselves changing in their personality and way of relating to others due to the office environment they were in.  It is important to be aware of the individuals and groups that hinder the success of your relationships rather that complement them.  For example, do the people you associate with generally condone the immoral and wrongful treatment of others?  Take a serious look at the people you, and those important to you, surround yourself with and decide if they are influencing you, your relationships, your career, your business and your life, positively or negatively.