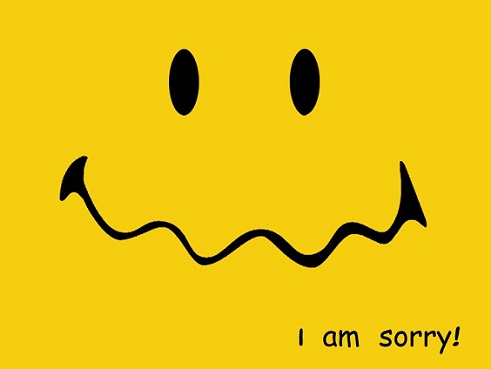 It Feels Good To Say Sorry

Some will fight against giving a simple apology for a mistake made.  Some would rather have a drawn out spat than acknowledge their wrong-doing, no matter how minor the incident is.  Some would rather expend more energy on constructing excuses for their ill behaviour than say a simple three word sentence: “I am sorry.”

Some years ago a person once said to me quite aggressively, “Fine, I f***ed up.”  Wow, what an insight that gave me into their interpretation of the act of apologising!  Upon hearing this I tried to explain that making a mistake was something all humans do.  That it was nothing to be ashamed of.  Of course, given their temper at the time, this didn’t quite seem to register with them.

As I continue through life I experience this rigid resistance in others to accept their own fallibility.  Why do some people struggle to disconnect their own self-image from such inappropriate feelings of almost self-hatred for having simply made a mistake?  It is their perception that taints their feelings, not the act of apologising itself.  This perception can stem from deep-rooted arrogance.  For these people, they feel that by apologising they’re stooping to a level that they do not belong to.  That the world should conform to their view, whether correct or not, because their view must be accepted as the only correct view.

Ironically, the arrogance that creates this self-image of superiority is the trait that demonstrates to others their deeply hidden/burried inferiority.

What interests me even further about this type of behaviour in the aggressor is that the aggressor can work so hard at proving they are in the right  (when they know they are not) that they consequently stress themselves out by pursuing this path.  Given time, they seem visibly uncomfortable within themselves, they become visibly weary from fighting for injustice, yet they continue on and on.  Ultimately, he who is in the right is at peace with himself for he knows he has been fair, even if the other person refuses to acknowledge it.  Meanwhile, he who is in the wrong suffers and suffers.

We are humans, we all make mistakes.  By accepting our own fallibility we earn respect and give others respect.  Mutual respect is a vital ingredient for a healthy relationship.