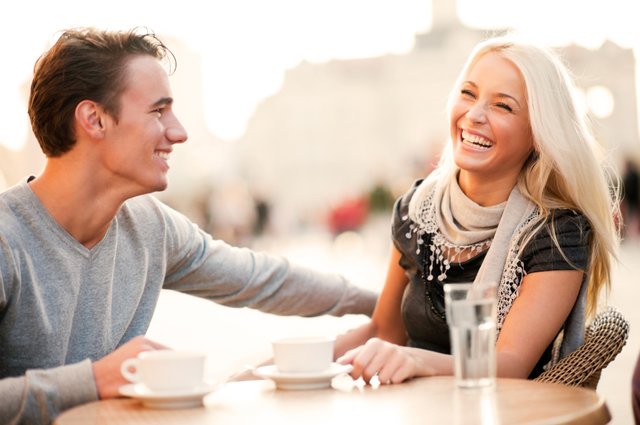 Research suggests that getting someone to laugh helps them to open up emotionally, meaning they are more likely to indulge in intimate self-disclosures.  Considering this very process is what helps us to bond with other human beings, this research sheds light on why laughter can be a great catalyst in helping us to form new relationships.

So How Does Laughter Help Us To Form New Relationships?

The study (Gray et al. 2015) suggests the secret is in the brain’s release of the hormone endorphin.  When we laugh, endorphins are released.  When this happens, it promotes social bonding.

In the study, 112 students with an average age of 22.43 years were split into males and females and both sexes were further split into one of three groups, thereby removing sexual effects from the study.

One group watched a 10-minute “comedy” clip (specifically, a clip taken from one of Michael McIntyre’s shows), another group watched a “neutral” clip taken from a golf instruction video (featuring Paul Wilson), and the third group of each gender watched a “positive affect” video showing lush, pleasant scenes and animals in the wild (an excerpt from one of BBC’s Planet Earth programmes).

The researchers found significantly more intimate disclosures took place in the group shown the comedy clip than in the neutral or positive affect groups and suspect this difference is due to the increased laughter in this group which will have led to increased endorphin in their bodies.

The authors of the research state, “Given laughter’s ability to trigger endorphin activation (Dunbar et al. 2012) and the role of endorphins in the formation of social bonds (Machin and Dunbar 2011), laughter may increase willingness to disclose intimate information because the opioid effect of endorphins makes individuals more relaxed about what they communicate.”

How Could Laughter Impact Different Relationships?

The great thing about this research is that it shows how strangers bond better simply because they have been laughing at something, not even at each other.

Therefore, if you’re on a first date, watching funny clips on YouTube could help you both relax and open up about intimate information about yourselves, and by doing so, propel you towards a greater closeness than you might otherwise experience.

It also suggests that laughter could help couples who are having relationship problems whereby they’re struggling to be socially intimate and can feel themselves drifting from one another, emotionally.

Parents of teenagers may also want to try incorporating something that gets them and their teen laughing together.  By doing so the teenager may be more willing to open up to their parent about their life and anything that might be troubling them.

Emotional intimacy helps us to bond with strangers and ongoing emotional intimacy is necessary fuel for successful, fulfilling, life-long relationships.  We could all incorporate more laughter-inducing activities to act as a catalyst in helping us to form new bonds and strengthen existing ones, whether in our career or personal life.